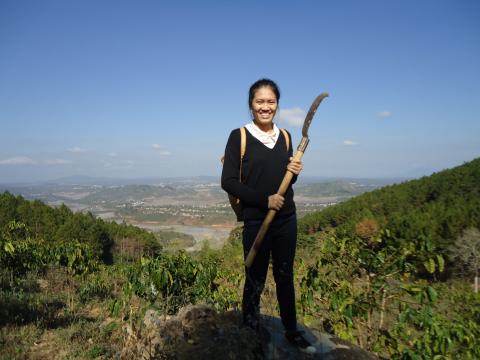 “Everything started in Denmark, actually!” says Hao of her time as a Danida Fellow at the University of Copenhagen, where she completed part of her PhD from the University of East Anglia in the UK. It was in Denmark that she had her most productive period of her PhD – writing almost five chapters in 6 months.

Whilst at Copenhagen University, Hao regularly attended seminars featuring the work of fellow PhD students and joined two research groups on environmental politics. Working with like-minded researchers in Copenhagen strongly influenced Hao’s academic development and the quality of her doctoral thesis, whilst providing moral support and pathways to integrate into Danish society. When asked to describe some of her most memorable moments in Denmark, Hao smilingly replies “having a drink with office mates in the late afternoon sunshine and enjoying vegetarian meals in my professor’s cozy living room”.

Hao’s doctoral studies were a component of the DANIDA project “REDD+: The Forest Grab of all Times?”. REDD+ stands for “Reducing Emissions from Deforestation and Forest Degradation in Developing Countries, and the Role of Conservation, Sustainable Management of Forests, and Enhancement of Forest Carbon Stocks in Developing Countries” and is a climate change mitigation solution developed by Parties to the United Nations Framework Convention on Climate Change. It places financial value on the carbon stored in forests by offering incentives, including results-based payments, for developing countries to reduce emissions from forested lands and to invest in low-carbon paths to sustainable development.

Particularly relevant to Hao’s research, national REDD+ processes are intended to meaningfully promote engagement of all stakeholders - including local indigenous groups and forest-dwelling peoples. It is in relation to these, most often marginalised, communities that Hao’s research interests lie and, specifically, in the context of Vietnam’s Central Highlands. By applying a gendered lens and working within the multilateral framework of REDD+, Hao’s PhD explored the extent to which a local community in the Central Highlands had access to productive land such as wet rice fields, coffee land and forests.

“Because of my working class background I can relate to people who are marginalised and have no voice. I live in the city, but when growing up I did not have many opportunities. I was never aware that we were poor, but we really were,” says Hao when explaining how her research focus and drive to pursue an international academic career in development are rooted in her upbringing in Vietnam.

She grew up in very humble yet supportive surroundings and from a young age learned to take responsibility for her future and to create her own opportunities. Due to injuries inflicted during the war, Hao’s father was unable to work and relied on his state pension, which was supplemented by her mother’s factory worker salary. Given that neither of her parents completed their own schooling, their biggest wish was for their children to have the best education possible, so academics were a big priority in Hao’s family.

“Against this, my father’s pain and having to work my way up the social ladder so to speak, I can say that I have nonetheless had equal opportunity to access good education and to study – now having received scholarships to complete both my Masters and PhD overseas,” concludes Hao, referring to her scholarship to study her MA in South East Asian Studies in Singapore and to triangulate her PhD between the UK, Denmark and Vietnam. Hao also holds a BA in History from Hanoi National University.

A misalignment between global gender norms and local realities

The location of the case study for Hao’s PhD was a pilot site for a number of environmental projects, making it the ideal place to carry out her field research. This context allowed her to readily explore the human relationships between the local people, local REDD+ officer and forest authorities at higher levels.

“Within this stakeholder landscape I explored the role of power relations between local men and women in land access, but also the perception of local people in terms of gendered division of labour as well as roles and responsibilities in access to forests. Then I compared this to national policy and global norms around gender equity in forest access,” explains Hao.

Hao’s main finding was that there is a misalignment between the global gender norms underlying REDD+ and what local women in Vietnam’s Central Highlands actually want. Simply explained, REDD+ initiatives and complementary national frameworks have to come up with certain statutes to ensure that REDD+ supports local livelihoods whilst contributing to gender equity. However, based on her research, Hao found that local forest-dependent women are not necessarily interested in gaining equal access to the forest. In interviews they repeatedly stated that they did not want to be burdened with it and that it is the men’s responsibility to harvest forest resources, adding that they were too scared to enter the forest themselves.

“Rather than assuming that it makes sense and will create positive impact, I looked at the situation and assessed whether REDD+ would fit in or not,” says Hao when explaining the crux of her work.

Hao says that although the Vietnamese government seemingly makes provisions for NGOs and indigenous people to contribute to gender relations in REDD+ and other environmental initiatives, it is – in practice – overcautious in taking up policy recommendations and findings from civil society. Also in terms of resources, the government provides limited incentives or contributions directly to this stakeholder group; “so far there has been an emphasis on workshops and training to generate awareness and work towards attitude and behaviour change when it comes to forest resources,” says Hao.

She continues, “Ultimately, the government is focused on implementing the technical aspects of REDD+ and simply making sure that they ‘tick’ the boxes of the global governance frameworks, as they want the funding! So gender considerations are not prioritised”. Reading between the lines, it seems that the effectiveness of global funding mechanisms and governance frameworks is yet again being put into question.

Hao continues to travel the world to share her research findings with colleagues and stakeholders, applying for opportunities – and accepting invitations - to contribute to key platforms for debate on relevant topics, in particular those related to normative imbalances in development policy and practice. For example, in 2019 Hao re-visited Denmark when she was selected by Danida Fellowship Centre and the Association of Development Researchers in Denmark to present her PhD findings at the 5th Joint Nordic Conference on Development Research. You can read more about this in this separate article.

After completing her PhD, Hao returned to Hanoi, the capital of Vietnam, to continue her work as a researcher at Vietnam’s Institute of Cultural Studies of the Vietnamese Academy of Social Sciences, a state-owned institute where she was also employed prior to commencing her PhD. She is eager to build on her work in the field of gender relations and stakeholder dynamics within global governance frameworks, and is busy applying for funding in support of her research projects.

One can only hope that Hao’s work will continue to provide this important gendered layer to the debate on the entrenched imbalances between global norms, national policy and local realities that, in her own words, severely undermine development efforts.