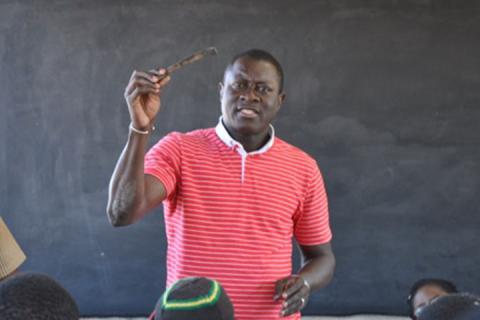 The internationally recognized scientist Cheikh Mbow heads the Washington, D.C. based organisation START International. His PhD "Remote sensing of fires in natural ecosystems" is from 2000, University of Copenhagen.
vq

Although he did not have any specific long-term ambitions as a child, Cheikh Mbow always did his utmost to do well. His perseverance paid off and he has come a long way since then. It would seem that it had always been on the cards that he would be successful and make an impact.

The internationally recognized scientist Cheikh Mbow, who heads the Washington, D.C. based organisation START International was born in Senegal in 1969 and grew up in a competitive environment where getting a good education and realizing one’s potential as an overall priority.

I was raised in a family where academic achievements were highly valued. If you had the talent and the skills, you were expected to translate them into professional development. It was as simple as that, Cheikh Mbow explains.

He did not disappoint his parents. Cheikh Mbow had a natural craving to learn and he worked hard. From primary school to high school, his grades were always amongst the highest in his class. At the Cheikh Anta Diop-Dakar University, where he finished his bachelor’s degree in geography in 1995, he received his first award. The following year, he was selected to take an advanced degree in environmental science botany at the Institute of Environmental Sciences-ISE in the Faculty of Science, also at Cheikh Anta Diop-Dakar University. He specialized in remote sensing. When two PhD opportunities abroad came up, one in France and one in Denmark, he was asked to apply. He chose the Danish option under Danida’s ENRECA (Enhancement of Research Capacity) programme.

There are two reasons why I opted for the Danish PhD. Firstly, the scholarship was for remote sensing in forestry, the area I was interested in. Secondly, it appealed to me to take part in a programme like Danida’s that essentially was about strengthening scientific skills in Africa for Africa, he says.

It also appealed to him that the Danes worked in English. Being from Senegal, Mbow is fluent in French. He wanted to learn English to broaden his horizons in order to work and compete with the best scientists internationally without being challenged by a language barrier.

Denmark was a positive shock
He never regretted his choice. From day one, Cheikh Mbow felt welcome in Denmark. On arrival at the University of Copenhagen on April 1997, he was given a master key that could open almost any office in the Geography Department, including his supervisor’s office.

The open-hearted way I was received in Denmark was a shock, but a positive shock. I took the key and thought about it a couple of minutes. I then concluded that the Danes have a very trusting system that includes me as a foreigner, Cheikh Mbow says.

He explains that the trust gave him confidence. It was like being in an incubator: he felt embraced and supported. It made it easy for him to fully engage in the work of his faculty and concentrate on accelerating academically. Given the unique conditions made for him to perform, he took two lifelong lessons from his study time in Denmark.

Don’t dismiss the local context in science
Fieldwork for his PhD research was carried out in Senegal, where he studied the impact of bushfires on biodiversity together with geographers from the University of Copenhagen.

While studying a local Senegalese issue, they were using methods developed in Europe. It puzzled Mbow that these methods were being used as if they were universal. He soon realized that they were insufficient and that they fell short of fitting the local context precisely because they did not fully consider the specific local context.

Forestry planning started in Europe in the 18th century. It is essentially geared towards efficient mass production of timber and falls short in a different biodiverse context where the forest has significance for the local population’s lifestyles and livelihood in a completely different way. In Africa, forest is not just “timber”: it includes ecosystem services and functions and cultural values that normative science assessments often fail to integrate thereby providing only a partial view of reality.

It taught me a very big lesson that has followed me ever since. The creation of scientific knowledge must take the specific local context and knowledge into account. If it does not, it cannot serve as the basis for local policy and solution making, he says.

The fundraising professor
After finishing his PhD “Remote sensing of fires in natural ecosystems” in 2000, Cheikh Mbow spent one year working at the University of Dakar-Senegal. He then moved on to do a post doc at Sherbrook University, Quebec, Canada before he returned to Cheikh Anta Diop-Dakar University in Dakar where he became Professor at the Environmental Science Institute.

While in Denmark and long after his graduation, Cheikh Mbow had been involved in other projects beside his PhD. As is the custom in Denmark, the University of Copenhagen did not provide all the required funding for these projects. Together with his colleagues, Cheikh Mbow had to fundraise for the research projects to materialize. Hence, the second key lesson Mbow took from Denmark was that to be a successful researcher you must be able to raise funds.

The Danish mentality is to use scientific research and knowledge gathering as a selling point to leverage funding that again enables even better projects and more robust research and results. So, when I came back to the university in Senegal it was with a mindset of a fundraiser, Mbow says.

This attitude helped him and his colleagues raise funding to build a fully equipped and modern geoinformatics laboratory over a period of ten years.

Believe me, the number of people who’ve been trained in the lab we built is outstanding. Most of them are now working at other universities where they are duplicating the same model, he says with pride in his voice. He mentions the International Foundation of Science, Danida, USAID and the African Development Bank among the contributing donors.

African science for Africa
In 2012, Cheikh Mbow decided to move on and pursue an international career. He became a senior scientist at the World Agroforestry Centre (ICRAF) based in Nairobi, Kenya. In 2016, he was appointed Executive Director of START International based in Washington, D.C.

Since the time of his PhD studies, strengthening scientific skills in Africa and contributing to knowledge making and solutions that fit specific local contexts has never ceased to be the central focus of Cheikh Mbow ambitions.

START International has given him a new platform from which to pursue his goals. The challenge, though, is different as it embraces a wider network and more complex portfolio of work.

START addresses global changes, from climate change to urbanization, from deforestation to natural disasters, and it does so by providing African and Asian scientists with opportunities for research, networking and skills training.

The impact on some of the world’s most dramatic changes like deforestation and climate change are in Africa and Asia. It is indispensable to collect context specific knowledge from local capacities to ensure adequate and long-term sustainable solutions to address these challenges, he says, and adds,

I took up the position with START because African and Asian research and knowledge creation takes centre stage in the organizational vision.

True to START’s vision, Mbow is leading the organisation through a process that will increase presence in the regions, by establishing staff in Africa, reinvigorating connections with research centres in Asia, and developing regional partnerships and networks.

For too many years, the belief has been that there is a lack of science in Africa and Asia. This new approach will help to correct that misperception. All the Asian and African scientist needs is a little bit of incubation, recognition and networking opportunities to contribute to solve the local and global challenges of our times, he says.