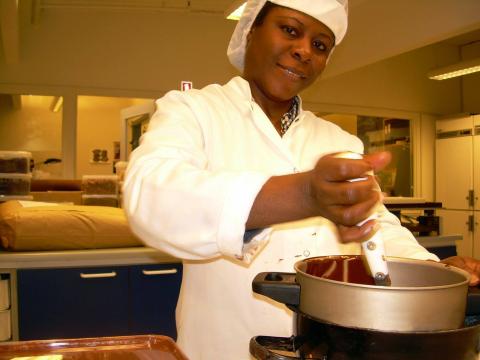 She refrains from being called a pioneer and she asks to be portrayed as an ordinary Ghanaian woman. But the truth is that she is an exceptional achiever. She is driven by compassion to improve Ghana’s food security.

Margaret Owusu is a Senior Research Scientist and Head of the Food Microbiology and Mushroom Research Division at CSIR-Food Research Institute in Accra.

Partly sponsored by Danida, partly by Toms Group, Margaret Owusu was a PhD student at the Faculty of Life Science, of Copenhagen University from 2007 to 2010. The title of her thesis is Influence of raw material and processing on aroma in chocolate.

Together with a team of other cocoa and agriculture experts from Ghana and Denmark Margaret Owusu’s research led to the development of chocolate from improved fermenting techniques of the raw cocoa beans used for the Toms Ekstra.

Traditionally, the farmers will extract the beans from the ripe pods and heap them on banana leaves to ferment.

With the technique that Margaret Owusu and the other experts developed, the farmers spread the beans to dry on wooden trays and stack ten trays on top of each other. This method gives a more even fermenting of the beans and a better taste of the chocolate.

In addition, it allows the farmers to dry more beans at the same time. It also speeds up the process. While the traditional heaping method takes 5-6 days, the 10-tray technique takes 2-3 days.

For the farmers, the tray technique has been a definite plus. It has given them the opportunity to ferment and dry more raw beans in a shorter time and increased their income, Margaret Owusu says.

Scholarly pioneer of the family
Margaret Owusu can appreciate what a higher income means. Her own roots are in rural Ghana. She grew up in Tema, a port city about 25 kilometres from the capital Accra, in what she describes as a normal Ghanaian family.

My mother was a trader; my father was a normal worker in the oil industry. They were not at all rich, but worked hard to secure their children’s education, Margaret Owusu says.

Her educational journey started off in the local public school, but soon she was moved to an international private school.

From an early stage, I showed academic potential and my parents wanted me to excel, Margaret Owusu says.

Value addition is key
Ghana’s cocoa production accounts for about eight percent of the country’s GDP. But according to Margaret Owusu it is far from enough. If processed cocoa products and not only raw beans were exported the percentage contribution of cocoa to GDP would increase dramatically.

It concerns Margaret Owusu that Ghana is not involved in the value addition of its own crops. There is sadness in her voice when she explains how absurd it seems to import tinned tomato pure from abroad while heaps of fresh tomatoes rot at the markets due to inadequate post-harvest methods.

If we processed our own food and maybe even exported it we would not only increase income to the country. It would also mean a more secure livelihood for the farmers, she says and continues.

She believes that the core of the problem is the lack of value addition and a food processing industry in Africa.

It is a huge problem that we do not have sophisticated post-harvest methods and are not engaged in extensive food processing. We export the raw materials and let others do the processing. We lose in terms of lost revenue and we lose because our farmers are kept in poverty, says Margaret Owusu.

Increase research towards local interests
A way forward towards improved food security is closer collaboration between the local food industry and the food research.

At the moment foreign donors and foreign companies sponsor a substantial proportion of Ghana’s food research. Inevitably a lot of the research is tilted towards foreign interest, which is not optimal for developing the local food industry.

We ought to bridge the gap between industry and research to improve our local food security. With Toms Group we made a move in the right direction. I wish we could collaborate closely with the local industry as well, Margaret Owusu says.