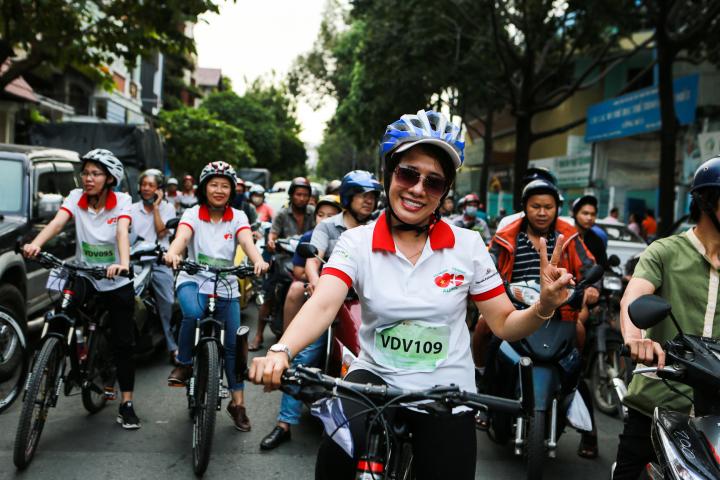 What do Uganda's Deputy Chief Justice, Denmark's Ambassador to Mexico and amateur cyclists in Vietnam have in common? They have all been important contributors to events arranged by DAN members across three continents in recent months, delivered with support from Danida Alumni Activity Grants.

In sharing an overview of selected Danida and Denmark alumni activities we also acknowledge and commend the efforts of all alumni activity organising teams and their supporting local network boards.

Coinciding with this year’s “Orange the World” campaign against gender-based violence, a group of 25 judicial officers took part in a one-day workshop at Uganda’s Judicial Training Institute (JTI) on curbing violence against women and girls. The event aimed to promote networking amongst Danida alumni in Uganda’s Judiciary and to share knowledge on emerging issues in gender and the law, with a particular emphasis on sexual and gender based violence, as explained by the JTI Executive Director, Lady Justice Damalie Lwanga.

It was organized by Danida alumni judicial officers in partnership with the JTI. The alumni organizing team of four, led by Winfred Kyobiika Naigaga, co-facilitated the workshop that covered topics such as cultural, institutional and legal barriers to access to justice in cases of violence against women and girls as well as the handling of children and sentencing in such cases.

Deputy Chief Justice, Justice Alfonse Chigamoy Owiny Dollo, spoke at the event, stating that the training was timely and was being carried out at a moment when the world is vigorously committed to preventing this form of violence. "Through this training, the Judiciary is equally engaged in activism to eliminate violence against women," he said, adding “violence against women takes various forms, and thus it requires specialized training and skilling of staff to eliminate discrimination."

Nicolaj A. Hejberg Petersen, Denmark’s Ambassador to Uganda, said that violence against women is not only devastating women’s lives and dividing communities, but is also undermining development efforts. The Ambassador congratulated the team that was awarded the Danida Alumni Activity Grant, adding that it was intended to support them in staying in touch to ensure committed collaboration with fellow alumni.

"This workshop is a great way of growing your professional networks and should be extended beyond the Judiciary to other professionals within the Danida Alumni Network," he said.

Mr Peter Rock Okwoko, representing the Board of the Danida Uganda Alumni Network, echoed the Ambassador’s encouragement, inviting all alumni to join the network and collectively explore how to address local challenges.

The event’s participating alumni form part of the several hundred Ugandan judges and magistrates, who completed the Danida Fellowship Centre’s four week Law and Justice Course between 1995 and 2015. Denmark’s support to Uganda’s Judiciary goes back to 1989.

According to the Mexican Diabetes Federation, diabetes is the second most prevalent cause of death in Mexico, having led to over 105,000 fatalities in 2016 – a number that has increased more than seven fold since 1980 and is predicted to rise. Tackling Mexico’s diabetes epidemic is a national priority, and one that is supported by Denmark’s Strategic Sector Cooperation Programme in the country.

Against this background, and in partnership with the Danish Embassy, Mexico’s Security and Social Services of the State Workers Institute (ISSTE) and the Mexican Diabetes Federation, the Danida Alumni Network Mexico gathered 180 health specialists for a full day Diabetes Symposium on 31 October in Mexico City.

The overall title of the event was “Strengthening Primary Medical Care in Diabetes Mellitus” and the programme consisted of two panel discussions that allowed for in-depth discussions and knowledge sharing around 1) capacity development for the prevention, diagnosis and treatment of diabetes mellitus type 2 and 2) multidisciplinary primary health care models for diabetes mellitus.

Amongst the event’s speakers and panellists were Dr Dirk Lund Christensen, MD, of the University of Copenhagen, the Danish Ambassador to Mexico, Lars Steen Nielsen, along with a number of senior Mexican health specialists representing the ISSTE, the Mexican Social Security Institute, the Centre of Integral Care of Patients with Diabetes and the Iztapalapa Specialised Diabetes Clinic.

There was clearly great value in exchanging approaches and solutions between Denmark and Mexico, as well as amongst Mexican health institutions. Participants and panelists received ample inspiration from each other and the programme, sparking new ideas, further knowledge exchange and ongoing contact.

Ho Chi Minh City based members of the Denmark-Vietnam Alumni Network, along with friends and supporters, cycled a route of 32 kilometres through the city in joyful memory of their time in Denmark, as part of an alumni-organised environment day to raise awareness of the consequences of air pollution.

Danida alum Truong Nguc Thao, with support from fellow alumni in Ho Chi Minh City, organized the event that was held on Sunday, 1 December and attracted more than 100 cyclists and volunteers. Besides the Danida Alumni Activity Grant, the organizing team also managed to attract sponsorship from Viet An Group and the Van Lang Industrial Waste and Environmental Consultancy Company.

Amongst the cyclists were Mr Carl Redmond, Associate Professor of International Cooperation at the University College of Northern Denmark (UCN), who also gave a speech about Danish cycling culture.

A group of Danida alumni, led by Lydia Otoo, in partnership with the Regional Water and Environmental Sanitation Centre Kumasi (RWESCK), marked Global Handwashing Day at the Ayeduase Elementary School. A dedicated programme was delivered to the pupils to help increase their awareness of the link between handwashing and health. RWESCK demonstrations and practice amongst the pupils formed part of the event, and a handwashing stand as well as four dustbins were donated to the school.

This event forms part of a larger sanitation project led by a group of Danida alumni in Ghana, which will also encompass alumni support to the construction of improved toilet facilities in the school grounds.