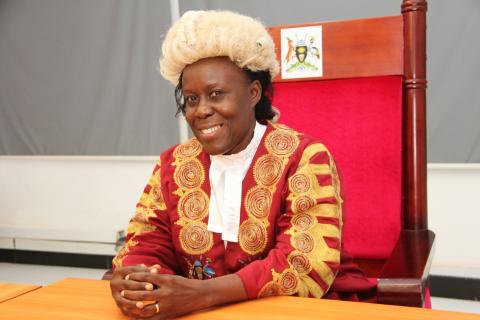 Kampala, Uganda: Lillian Tibatemwa-Ekirikubinza’s CV is impressive. She is basically a first in almost everything.

We are at her office at the Supreme Court of Uganda and she is recounting her previous endeavours.

First East African female to graduate with a PhD in law. First female Professor of Law in East Africa. First female appointed Deputy Vice-Chancellor of Makerere University in Uganda. First Ugandan to be appointed to Uganda’s constitutional Court and Supreme Court solely based on scholarly work.

While listing the positions Lillian Tibatemwa-Ekirikubinza narrows her eyes making sure to get the details correct. Then she looks straight at me.

You may add that I was the first Ugandan to pursue a doctorate in criminal law and criminology at Copenhagen University, she says and laughs.

Denmark -  a new challenge
When Lillian Tibatemwa-Ekirikubinza enrolled as a PhD student in 1992 at the Institute of Criminal Law and Criminology, Copenhagen University it was a whole new challenge to her.

She had a Bachelor in Law from Makerere University in Uganda and a Master's Degree in Commercial Law from Bristol University. Her education and professional outlook leaned towards interpreting everything from a strictly legal perspective.

At the Institute of Criminal Law and Criminology in Copenhagen, she found herself not only in a new country, surrounded by a new and unfamiliar language but also in a total new academic environment.

At first demanding, today she calls it a healthy mix of sociology and law.

It widened my perspective and had a lasting effect on my career path. Denmark made me interrogate the law in relation to societies’ cultures and norms. I no longer take the law for what it is on paper but interrogate it especially in relation to gender and the patriarchy society we live in, she says.

Supervised by two professors, one of Sociology and, one of Law, Lillian Tibatemwa-Ekirikubinza's PhD study was in women’s violent crimes in Uganda. Her empirical research was about female prisoners, who had committed capital crimes against their husbands or partners.

More sinned against than sinning
She found that it was impossible to separate the context these women had lived in from the crimes they had committed.

I decided to title my doctorate “Women's Violent Crimes in Uganda. More Sinned Against than Sinning”. For yes, these women had committed inexcusable crimes, but society had also sinned against them. They were victims of the surrounding society's unequal expectations to men and women, she explains.

Ambitious from childhood
Lillian Tibatemwa-Ekirikubinza’s own background stands in stark contrast to that of the imprisoned women, whose lives and destinies she spent her PhD years exploring and trying to understand.

She attributes her own drive and high ambitions to her upbringing.

My parents believed in education. We were eight children, four girls and four boys. We were all sent to the best schools and expected to come back home with the best possible grades. Girls or boys, the pressure was equally high on us all, she says and laughs again when she adds;

I was the last-born, maybe that is why I always strived to be first.

A good relationship to be continued
Since her PhD stay in Denmark, Lillian Tibatemwa-Ekirikubinza has been back several times as a visiting scholar in different capacities, but always staying at Danida Fellowship Centre. She is delighted about the prospects of a formalised Danida Alumni Network and calls it a natural continuation of a good relationship.

It is only fair that I as a Danish alumni get an opportunity to give back to the Danish state that invested in me. I hope that the Danish embassies, universities and business will embrace Danida Alumni Network and make use of it as a welcome global pool of human resources, she says.