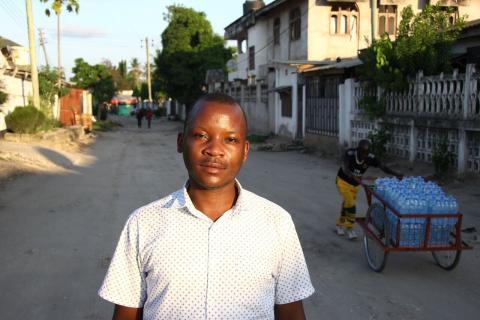 Eating plastic? Not a nice feeling. Neither for human beings, nor fish. As part of the BSU Master programme, 33 year old Bahati Sosthenes Mayoma from Tanzania has studied plastic pollution in lakes and seas. He graduated in 2010 and studied BSc. Aquatic Environmental Sciences and Conservation, from Univeristy of Dar es Salaam with honors.

While finalizing his Master’s first year at Roskilde University in Denmark, he was made aware of the Danish NGO ‘Plastic Change’ that encourages students to do research in this field. He applied and was selected.

Plastic everywhere
From 2013-15 he studied at Roskilde University in Denmark. To do research for his Master thesis, Bahati went to Mediterranean Sea near Almeria in Spain and near the Italian Island of Sicily.

We found plastic everywhere! he says pointing his finger in all directions.

Generally, the smaller the size, the higher the abundance. He explains:

It is very problematic when it comes to the ecosystem. Even small fish like sardines can consume small pieces of plastic.

The plastic gets stuck in the stomachs of the fish – or gastrointestinal  tracts (GIT) - in the language of science, and ends up in human beings eating the fruits of the sea. The tendency was clear; The further away from the coast of Italy, the less plastic in the water, and the closer you got to the Straits of Gibraltar from the Eastern part of the  Mediterranean  basin , the less plastic, because of water coming from the huge Atlantic Ocean.

Lake Victoria also affected
In 2015, upon his return to Tanzania, Bahati used his newly acquired skills and knowledge. He took up a post as Fisheries and Environmental Officer at Mtwara District Council at the Indian Ocean coastline in the south of Tanzania. But this is not where he started his research. In collaboration with Roskilde University and the National Museum of Denmark, Bahati approached the largest lake in Africa: Lake Victoria.

Close to Mwanza, the second biggest town in Tanzania, the team carried out a small study based on the same methodology learnt in Denmark and used in Italy and Spain.

We found that 20 per cent of the fish had plastic in their gastrointestinal tracts. We were the first to show the world and Tanzania that we have a problem in our waters, says Bahati.

Since the research only took place around Mwanza, the findings are only circulating among researchers – not in the Tanzanian media. A study covering a bigger portion of the lake is needed to see whether it is a general problem or confined to the urbanized area. If a new study concludes that a high percentage of Tilapia and Nile Perch from the Lake Victoria contain plastic, it could affect long term sustainability of the fish which are already under pressure from overfishing and nutrient loading from both agriculture and municipal wastes, Bahati reckons.

Freedom of choice Studying in Denmark has had a big impact on Bahati, both professionally and personally.

The subjects taught were global, so I have got a much more international perspective, he says.

Bahati liked that the students originated from many different countries around the globe. He also appreciated the way the Danish teachers gave the students the freedom of choice.

In Tanzania you simply follow what the teacher dictates, he sighs. He also learnt to be more extrovert.

I have improved my capacity to express myself in front of a bigger audience, he says.

What he did not like, however, is the way the Danish students isolate themselves showing little interest in foreigners.

Environmentally friendly
Bahati is now winding up his job as Fisheries and Environmental Officer in Mtwara The interview is over. Bahati will go to the hotel. The next morning, he will bring a group of delegates from foreign environmental consultancy firms to his work station in Mtwara to show them how the Tanzanian authorities deal with environmental issues. The ultimate goal is to form a joint venture in this field. And when the paper work is over, his next stop will be Dodoma where he has just secured a job at the university as an assistant lecturer in Biotechnology and Bioinformatics.

What I learnt in Denmark has certainly been a contributing factor in getting the new job, Bahati smiles.

He also owns the private company ‘BM Ecological Consultants’ offering consultancies to private enterprises, organizations or the government. Environment is the key word for Bahati and he is concerned about the developments in his home country slowly moving from low to middle income status.

Tanzania has seen many investments in mining, and the oil and gas industry and construction over the last years. Some of them are damaging.

“We should not stop investment, but we should encourage them to do it in a sustainable and environmentally friendly way,” he concludes.

BSU Master Programme In Denmark:
Bahati Sosthenes Mayoma took part in BSU Master Programme, a part of the ‘Building Stronger Universities’ programme. In 2013, Danida initiated a two-year Master scholarship programme to be run by Danida Fellowship Centre as a supplement to the existing fellowship programme. The aim was – and is – to provide talented students from South partner universities with the opportunity to obtain a Master’s degree from a Danish university in order to contribute to the development of their countries. From the 2013 intake, 37 out of 38 candidates have completed their Master programme, the vast majority with very good results.