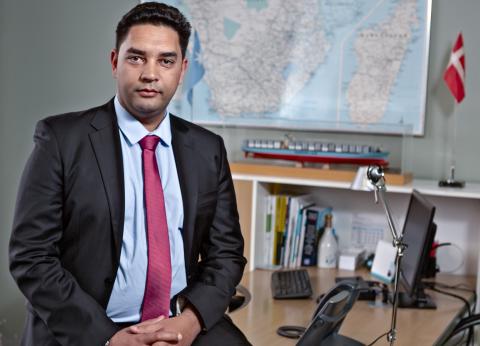 Compassion is the word that springs to mind while speaking to Robert Leo Maslamoney. Compassion for his family, for his job, for making a positive impact in the company he works for and the countries where it operates.

I do get job offers from elsewhere, but so far, I have declined them. Maersk operates from a strong set of values that resonate with my own and the way I was brought up, he says.

Strong, loving family
Robert Leo Maslamoney is South African. He grew up in the Southern suburbs of Western Cape, during the apartheid era, but in a very happy and loving home. His father was a carpenter while his mother would take care of their home and six children, all boys.

I grew up in a very modest and humble home. Love for one another, us children, and a strong set of values where honesty, hard work and respect for others came first. They drilled these values into us. So even though the neighborhood we lived in was rough, it never affected any of us, he says

In the shadow of apartheid
Robert Leo Maslamoney’s early childhood years were during the apartheid era. He recalls how police officers were always present on the streets and how the apartheid government would control basic access to utilities like water and electricity in some areas. There would be curfews; no one could go out after sunset.

It was a very grim period, but it taught me the effects of a system based on creating inequality. It is down spiraling and extremely dangerous, says Robert Leo Maslamoney, who vividly remembers when Nelson Mandela walked out of prison as a free man in 1994.

It was a day of joy. I remember coming home from school and talking to my family and friends about what the future could possibly look like now. There was a clear feeling of renewed hope almost from one day to the next. I realized that if my grades were high enough and if I worked hard I could even go to University of Cape Town that was deemed a whites-only university, he says.

Moving on
Seven years later, Robert Leo Maslamoney got a scholarship and enrolled at the University of Cape Town. In 2006 he joined Maersk and spent the following eight years in various roles until he got to a stage in his life where he realized that in order to give more back to the company and to grow he needed to do something completely different. He applied for Danida Fellowship Centre’s Emerging Leadership Scholarship Programme for an international MBA at Copenhagen Business School.

It is undoubtedly one of the best things I have ever done. It was amazing to move to Denmark, to stay in a small flat in Amager and live the Danish way of life and immerse myself full time into a rigorous course at Copenhagen Business School with a group of likeminded people. It helped make a better version of myself, update my toolbox and also taught my wife and I the importance of having a balanced life, says Robert Leo Maslamoney, whose two children have Danish names: Mia and Kai.

I feel very fortunate to be availed these opportunities. In my current role, I am able to play an important part in helping to grow and develop the economy, Robert Leo Maslamoney says.

Doing business in Africa
He speaks in favorable terms about how challenging but rewarding it is to do business in Africa. Two days are never the same and it takes a certain entrepreneurial and problem solving instinct to be successful. He emphasizes, that seen from an employer’s point of view there is ample talent in Africa if one can spot it.

Strong values as key to success
Particularly, smaller Danish companies might think that the business climate in Africa is too unfamiliar to succeed in, but if one doesn’t get carried away, remains true to ones own values and norms, and builds strong and sustainable relationships based on trust, there should be no concern, according to Robert Leo Maslamoney. His own method of success is clear;

I always make sure to keep a little bit of Denmark with me because the dominant values of the country resonate with my own, privately and professionally, he says