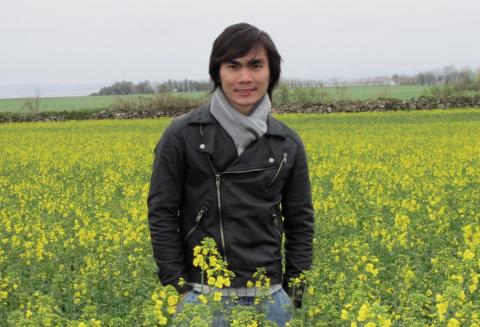 Can Tho, Vietnam/Copenhagen, Denmark. A few minutes into our Skype conversation, it becomes quite clear that Nguyễn Đắc Khoa does not shy away from following unorthodox and unpredictable routes to reach his goals.

Singer since elementary school
While many others take up student jobs as waiters or receptionists, Khoa chose to sing. Having performed since he was four at a music center for children of his home city, singing was the obvious choice to supplement his income while studying. It was not planned that way, but by the time Khoa reached university level he had became a household name at the theatres and clubs of his home city Can Tho in Southern Vietnam. He was also invited to perform at regional and national level.

Being a singer was an unorthodox student job and great fun, but not a career path for life. Today I only use singing as a way to relax or as my contribution to an event, the 38-year-old scientist says.

PhD in Denmark not planned
Yet, the ability to follow unorthodox and unpredictable paths has remained with Khoa. He did not make a formal application for the PhD post in Denmark. When the team of the Danida funded project “Integrated disease and nutrient management in intensive rice production systems” came to Vietnam in 2007, Khoa was assigned to take care of the team’s logistics.

The research team was impressed with Khoa. They encouraged him to sit for the PhD candidate interviews. With a Master degree in Molecular Biology and Biotechnology from University of the Philippines and the International Rice Research Institute, Khoa comfortably answered the questions. He was selected. Shortly after, he departed for Copenhagen to pursue a PhD in Plant Pathology working in bio-control of rice diseases.

I was fortunate, but also a bit unprepared when I got the PhD scholarship. I had only a short time to get ready to go abroad for several years, he says and laughs. He hastens to explain that he soon felt at home in Denmark:

Once I landed in Denmark, immediately I felt at ease. Denmark is a peaceful country with friendly and frank people. The Danish education system is among the highest ranking systems in the world, he says.

Candid, professional Vietnamese-Danish collaboration
At the Faculty of Life Sciences, University of Copenhagen, Khoa found himself in a working environment of inspiring, candid collaboration. His voice is full of warmth and enthusiasm when he explains that the achievements of the project wouldn’t have happened without the collaborative and forthright exchanges.

I would hear “No”, “No”, “No” so many times during our discussions. No uttered by professors, team members and students. I was not used to this kind of direct exchange, but I soon figured that being forthright and direct was not impolite, but rather a useful method while collaborating. By being frank we made use of the different team member’s knowledge and strengths, he explains, stressing the “No” in a loud voice full of humour each time he repeats it.

Plant extracts to control rice diseases
And indeed the outcomes of the collaborative research project between Can Tho University in Vietnam and University of Copenhagen in Denmark are important.

One of the most serious rice diseases worldwide is called sheath blight. It is difficult to control, Khoa explains. Widespread use of chemical pesticides to control sheath blight has proved to be insufficient and harmful to the eco-system.

Methods of bio control using plant extracts to prevent rice diseases are of utmost importance especially for small-scale farmers. It means that the remedy to keep the farmer’s crops healthy are in their own hands, and not in the hands of companies offering them expensive chemicals on commercial terms, says Khoa.

He emphasises that the bio control methods are applicable in any tropical developing country in Asia, Africa or Latin America. But that it will take extra funding for a new phase of the project to roll it out in a new stage.

I hope it will be possible to raise funds to continue the project and transfer the technology to subsistence farmers, he says.

“No” as a teaching method in Vietnam
Back in Vietnam as Lecturer and Deputy Head of the Department of Molecular Biotechnology, Khoa encourages his students to make use of the open, frank methods of team interactions that he learned in Denmark.

If they don’t speak up, nobody knows what they think, nobody is aware of how they can contribute. I tell my students that if they want to excel, they have to learn how to be forthright and to say yes and no when they mean it, says the singer now Doctor of Philosophy in Plant Pathology.