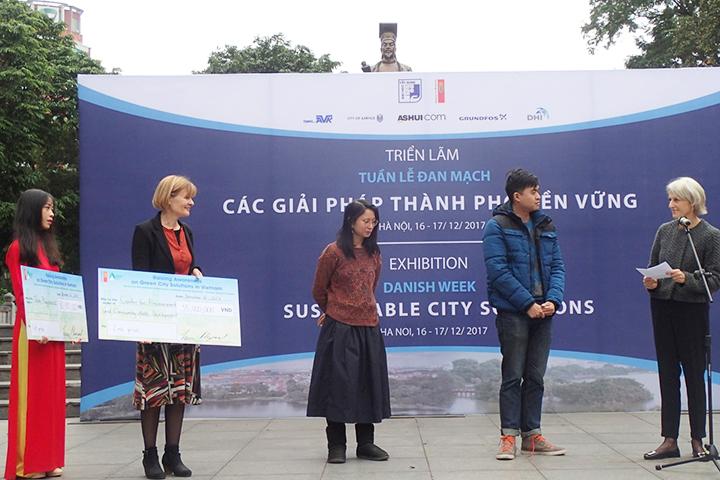 Vietnam has made huge economic advances over the past decades, but its environment suffers. Especially the cities endure severe traffic congestions and air pollution. The capital Hanoi had 282 days of poor air quality in 2016 according to WHO criteria. More than 30,000 Vietnamese die every year related to air pollution, according to a recent study.  In addition, Vietnam has been identified as one of the he world’s biggest plastic polluters responsible for more than 60% of the global plastic pollution.

On Saturday 16th it culminated with a prize award ceremony. The four winning teams were presented by Charlotte Laursen, Ambassador to Denmark.

The two 2nd prizes of 35 millioner Vietnam Dong (1500 USD) we awarded to Adopt a Spot /Clean up Vietnam, Ho Chi Minh City and to the NGO “Center for Environment and Community Assets Development, CECAD aiming at reducing waste in Hanoi.

When presenting the prices the Danish ambassador to Vietnam Charlotte Laursen congratulated the winners and thanked the alumni network and Danida Fellowship Centre for sponsoring the competition.

It has been a great encouragement to see how many good ideas are out there, and we hope the Alumni Network and this year’s sponsor – the Danida Fellowship Centre in Copenhagen - can find funds to organize this competition again next year, said Charlotte Laursen to the invited guests and the gathered crowd at the Ly Tai To Square in Hanoi’s city centre

We are very proud to win the first prize. Hanoi is in severe lack of open play areas for children. We have already build 60 playgrounds together with the local community different places in the city. We will use the prize to make six more sustainable, stimulation and creative public playgrounds, said Chu Kim Duc

The winning teams in Hanoi
Think Playground from Hanoi was awarded 1st price for finding empty spaces in the city, cleaning them and together with the community turning them into green playgrounds for children made of recycled material for children. Center for Environment and Community Assets Development , CEAD won the T 2nd prize in Hanoi for their proposal to develop roof-top composting and gardening project in Hanoi. The awarded funding will be used to recycle waste that can be composted and turned into rich soil to be used for growing vegetables on rooftops in Hanoi, reducing waste and making Hanoi greener.

Selecting the best ideas
Prior to the presentation of the winners of Raising Awareness on Green City Solutions competition a process had been on where local NGOs, student organizations, and social enterprises in Hanoi and Ho Chi Minh City had submitted their ideas to ensure greener and cleaner cities.

Eight projects had been selected; four from each city. They were presented to a jury in Hanoi and in Ho Chi Minh City. In each city, the jury was made up by a Vietnam-Denmark alum, a representative from the university where the event took place, a Danish company and the Danish embassy.

Networking for a greener Vietnam
In Ho Chi Minh City, where the organisations were presenting their project ideas at Ho Chi Minh City Architecture University on 15th December, the event soon changed from being a rivalry competition to a friendly and welcome networking occasion.

I am very inspired by the idea of Ichange and will be happy to collaborate with them in the future said, Peter Cornish, Adopt a spot / Clean Up Vietnam after Ichange Vietnams presentation.

Ichange Vietnam is not only a 21 days campaign of plastic free behavior; it is the beginning of a movement where individuals like you and I take personal responsibility for our use of plastic and inspire others to do the same. We will be very pleased to work with Adopt a Spot and Peter Cornish and the rest of his team, replied Tghu Nguyen, Change Vietnam.

I almost got goose bumbles when I listened the presentations today. These are the kind of community based actions we need as part of creating a more sustainable Vietnam, Mr Zhang said after the presentations.

Networking with alumni
Alumni supported the development of the Raising Awareness on Green City Solutions competition from the time of the initial idea. It matched the objectives of Danida Alumni Network because it served a meaningful course while at the same time reaching out to and connecting stakeholders in both Vietnam and Denmark.

A competition focusing on creating green solutions cities arranged by a Danish alumni network and supported by the Danish embassy is a perfect example of a meaningful activity we like to see our alumni to engage in. It has a positive impact on the wider community and it connects alumni with relevant stakeholders in Denmark and the country the alumni come from, said Lene Mosegaard, Programme Manager, Danida Alumni Network.

This is the first public activity the Denmark Vietnam Alumni Network has arranged. I look forward to continuing the collaboration next year, says Morten Pristed, Growth Counselor, Danish Embassy Vietnam.

Raising Awareness on Green City Solutions competition was part of the Danish Week on Sustainable City Solutions arranged by the Danish Embassy. Between 12th to 15th November 2017 leading Danish and Vietnamese architects and urban planners presented and discussed green, sustainable city solutions at seminars held at Hanoi National University of Civil Engineering and Ho Chi Minh City Architecture. An exhibition displaying how the two biggest cities in Denmark, Copenhagen and Aarhus, had made their cities sustainable were showed at both universities in the same period.

In conjunction with the award-ceremony the exhibition was put up on display at the Ly Tai To Square in the middle of Hanoi’s city centre around the Hoan Kiem lake Lake.

To Quoc Nguyen, CECAD winner of the 2nd prize Hanoi it was the perfectly chosen locality because this particular area has been declared a car-free zone every weekend by the city council.
It’s an appropriate spot for the exhibition and award ceremony.

This is our city; we live in it and we raise our children in it. The car free zone over the weekend gives hope for a more sustainable green city in the future, said Quoc Nguyen said.