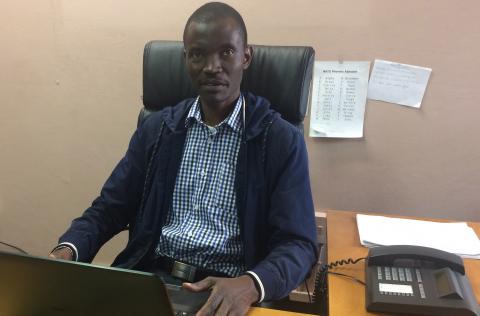 It is a sunny summer’s morning in Copenhagen, and the end of a busy visit to Denmark for Moses Mukota, a Scientist at the Department of Water and Sanitation in South Africa.

“The first time I came, it was very cold. Nice to get a different perspective from the cold weather!” he says with a smile.

Moses was born in Uganda and grew up in Zimbabwe. He currently lives in Pretoria, South Africa, where he works for the Department of Water and Sanitation as a Scientist in the Information Programmes Directorate.

He explains that he is responsible for projects under the South African National Commission of UNESCO’s International Hydrological Programme, which covers important issues such as groundwater governance in transboundary aquifers.

Moses’ current responsibilities include managing the information components for the Ramotswa aquifer (under the Resilience in the Limpopo River Basin Programme) that borders Botswana and South Africa. He is also a member of the project team for the Stampriet aquifer project. The Stampriet aquifer is surrounded by South Africa, Namibia and Botswana.

Moses comes across as a considered, calm and modest man, humbly describing his job as “coordinating information requirements between different project partners and stakeholders”. However, with projects that involve multiple institutions across three spheres of Government as well as a host of international agencies, it is unlikely that his role is as simple as he lets on.

He explains that his contributions are often part of a wider effort that seeks to incorporate social, environmental and geophysical components.

These multi-disciplinary programmes have an important role to play when it comes to South Africa’s national security and wider regional stability. For example, Moses and his colleagues have been part of developing a multi-country cooperation mechanism for shared management of the Stampriet aquifer between South Africa, Botswana and Namibia. He describes this as something that will “assist in how best to manage the underground water resource equitably and fairly in order for people to benefit, right across the three countries”.

Moses continues, in the same modest vein, to clarify that his conference participation was related to a different project entirely. This is the ‘Framework Programme for Education, Training and Research in the Water Sector’ (FETWater), which is partly under his helm and lead by South Africa’s Water Research Commission.

FETWater is focused on training and capacity building in the South African water sector, with the aim of equipping stakeholders to implement the National Water Act as well as to address priorities identified in the National Development Plan.

The project team is currently gathering final inputs before concluding their initial research and development phase. Yet, as a true scientist, Moses explains that data will be gathered throughout the programme’s lifecycle to inform continuous improvements.

From a child’s love of laboratories to a scientific career

It is a passion for the scientific approach to problem solving that has driven Moses throughout his career. Moses completed his Bachelor’s degree in Chemistry before going on to do a Master’s degree in Environmental Science at the University of Zimbabwe.

A keen interest in addressing the challenges of environmental pollution emerged during Moses’ time as a Chemist for Mobil Oil Zimbabwe.

“I soon realised that motor oils and petroleum products in general are toxic to the environment and have long lasting impacts,” he says

This led to a shift in his career, and upon completing his Master’s degree, Moses took on the role of Environmental Scientist for the Scientific, Industrial Research and Development Centre in Zimbabwe, before his move to South Africa.

But it was in his father’s laboratory, whilst Moses was still a child, that the seed for his scientific career was first sown.

“My father is a medical laboratory technologist. He always talked about his work in the lab - the chemical analysis and reactions, the instrumentation and methods used in disease identification. My father used to take me with him to his lab and I always thought: This is the environment I want to work in!”

Professional and societal learnings from Denmark

Moses completed his Danida Scholarship in 2018, staying in Denmark for around two months. He and his colleagues have been impressed with the learnings they drew from the course, and Moses mentions how useful it was to be introduced to the OECD Principles on Water Governance and the EU Water Framework Directive.

But of course Moses not only took home new insights from the classroom. He also describes how the high levels of equality and trust in Danish society have left a significant impression on him.

“I think your culture is built on honesty and integrity. You don't believe that someone can deliberately do something that is wrong. For instance, if you look at the metro system, you don't always find inspectors in the trains or at the stations, who check if you have a valid ticket. Also, If you go to the supermarkets, you find a lot of products outside. So, the person responsible is right inside, and I feel he's very sure no one is going to come to the shop and just take a pumpkin or a banana and just walk away! If you pick something from outside you go inside and you pay for it. This is very different, in South Africa or Zimbabwe there are a lot of issues around trust”, he says.

When asked whether the Danish concepts of equality and trust are something that he has been able to apply back home, Moses answers that it is something he practices in his family. But he doubts that he, as an individual, can bring about the necessary change to impact the wider community.

“It can’t be one or two people, you need a whole community or a whole region to approach it in the same way. But you can always plant a seed…”.