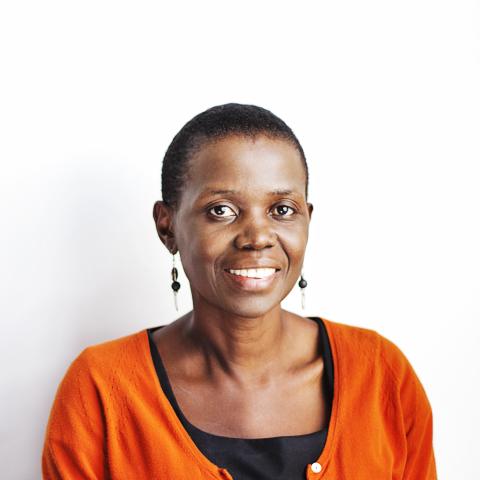 Nairobi, Kenya/Copenhagen, Denmark: Harriet Birungi is busy. She travels a lot and her days are filled to the brim with tasks and meetings. To get an appointment with her is not easy.

But as soon as we connect on Skype from Nairobi to Copenhagen, she assures me that she has ample time for the interview.

There is so much I want to say. I always look back and think that I got the best education and the best support for my PhD in Denmark. I am so delighted to share my story and experiences, she says.

A job on the move
Harriet Birungi is Senior Associate and Country Director at the Population Council Office in Kenya. The Population Council t is a leading global research institution with headquarters in New York and conducts biomedical, social science, and public health research in more than 50 countries around the world. Harriet Birungi is a Ugandan, but she has lived in Nairobi for the past 16 years, where she heads Population Council, Kenya. In addition, she manages a handful of global research programs addressing critical health and development challenges particularly affecting women and girls.

I live in Kenya, but I work globally and travel 75% of my time. Without really knowing it, I guess I signed up for a job on the move already at university level by my subject choices, she laughs.

Harriet Birungi finished her BA in Social Science at Makerere University, Uganda in 1985 and went on to Holland to do her MA in Development Studies from the Institute of Social Studies, The Hague. Two years later she returned to Uganda. The country had just come out of two decades of war and several unstable regimes. In the post conflict context, there was an acute need for development workers.

Everything needed to be rebuilt. The entire health care system had broken down. There was an imminent lack of hospitals, medical facilities, doctors and medicines. To make the situation worse, the HIV AIDS epidemic was spreading rapidly, Harriet Birungi says.

It began with injection use and practices
The World Health Organisation, WHO assisted the government of Uganda to reverse the epidemic. A massive research program was set up in collaboration with universities, government agencies, international development organisation and NGOs. Harriet Birungi was assigned as researcher under the mentorship of Susan Whyte, Professor in Anthropology at University of Copenhagen on a study of injection use and practices.

At that time medical injections in Uganda were regulated by the state. No layperson was supposed to own or have a needle or a syringe in their home.

But with the explosive HIV epidemic, people realized that they had to take matters into their own hands to try to get treatment. Harriet Birungi explains how there was a total loss of trust in public health institutions.

People basically believed that they could only trust things that they owned. But they lacked information about safe injection practises and access to the medicines. The result were disastrous situations where needles and syringes were reused and shared, she says.

The misuses of the injections were soon suspected to be one of the factors responsible for the spread of HIV. A mass campaign was launched to warn people about the dangers of sharing needles and syringes and to inform them about safe injection practices. It became the first step towards the state’s endorsements of private health initiatives and a health care reform.

Game changer
It was against this background that Harriet Birungi was given an opportunity by “friends of Makerere Institute of Social Research” – Professor Susan Whyte and Professor Holger Bent Hansen to enroll for a sandwich PhD program in Medical Anthropology under the ENRECA (Enchancing Research Capacity) Program at the Department of Anthropology, University of Copenhagen. She wanted to understand how people relate to medical technologies in specific cultural contexts, and the changing relations between public and private health care in the context of health care reforms.

Harriet Birungi based the research on the work that she had already done for WHO with Susan Whyte. The tittle of her PhD thesis was: Injections and Self-Help: Risk and Trust in Ugandan Health Care. It concluded that the change in the injection practices in Uganda necessitated a change in the organization of the public health institutions.

A quick look at researchgate.net shows that Harriet Birungi’s findings are still cited again and again. She modestly admits that the work was important.

Looking back I will say that our work was part of changing the realities on the ground and saving lives of lay people, who much desired to have injections. We influenced policy and we influenced the pharmaceutical industry to develop appropriate technologies tailored to the realities and matching people’s needs. For example the shift from re-usable needles and syringes to disposable injections technologies became a complete game changer, she says.

Biggest anxiety unwanted pregnancy
As the Country Director of the Population Council in Kenya Harriet Birungi draws on these experiences from her PhD years.

One of the global research programs Harriet Birungi heads is the Strengthening Evidence for Programming on Unintended Pregnancy Research Program Consortium, the so-called STEP UP program. It has research activities in Bangladesh, India, Ghana, Kenya, and Senegal. Harriet Birungi explains that unwanted pregnancy is what the young girls in these countries fear most of all.

When I speak with the 10-19 years old girls, they tell me that unwanted pregnancy is their biggest anxiety. As a matter of fact they dread it more than getting infected with HIV AIDS, Harriet Birungi says.

The consequence is that many women and girls seek illegal, crude abortion methods. They risk their lives. As was the case with the HIV AIDS epidemic, the only way to protect them is to change the reality on the ground, explains Harriet Birungi.

In the specific cultural and political contexts there is no other way to prevent unintended, unwanted pregnancies and unsafe abortions than giving women and girls comprehensive information on sexuality and pregnancy prevention and expanding access to safe contraceptives methods.  We need to empower young girls to protect themselves and have a say in their lives – we cannot afford to continue controlling information and important medical technologies, says Harriet Birungi.

She draws a parallel between the studies she did for her PhD and her present work.

My research has always been about saving lives, she says.

Circle of mutual learning
Harriet Birungi still keep close ties with her former PhD supervisor Susan Whyte and the other friends of Makerere Institute of Social Research, who became a lifelong friends and sources of inspiration.

Susan Whyte, Michael Whyte and Holger Bernt Hansen are the best that ever happened to me. They generously created huge and lasting opportunities for me. Apart from teaching me anthropology they taught me dedication, how to be humble, accountable and the value of transparency. These are all skills and principles that I as a leader try to pass on to others, she says.

Each year the Population Council receives numerous interns, especially from American and African universities. Harriet Birungi encourages other nationalities to apply for internship at the council as well, in particular Danish students of Anthropology and Global Health.

I received so much from Denmark. I would be thankful to be able to give back and keep the circle of inspiration and mutual learning and re-learning intact, the dedicated Director says.