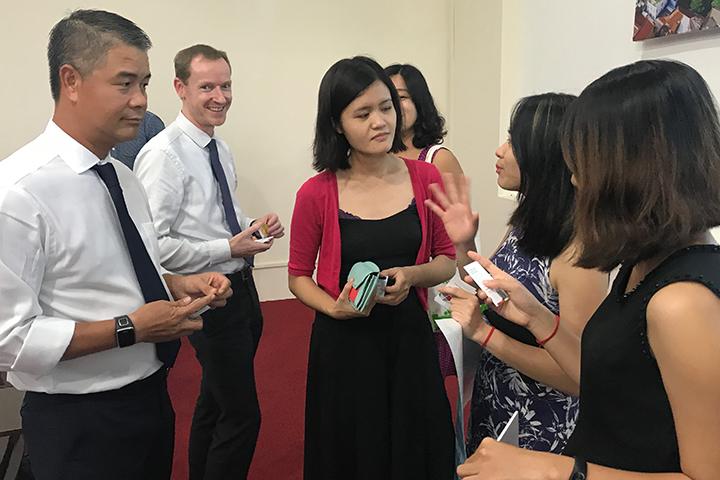 Working at Grundfos is not just about doing a job. It is about being part of a larger team and making a positive impact, says Thang Nguyen Xuan, Grundfos Vietnam’s General Manager.

He and I are sitting on a bench outside in the courtyard of the University of Architecture, Ho Chi Minh City where the Denmark-Vietnam Alumni Network’s Raising Awareness on Green City Solutions in Vietnam competition has just finished.

But first, we talk about Grundfos.

A sense of pride
Thang Nguyen Xuan has been Grundfos Vietnam’s General Manager for three and a half years. Prior to that, he had mostly worked with American companies. After joining Grundfos, he soon realized that the working environment was very different from his previous experiences.

Many companies say they are community and customer oriented but it was not until I came to Grundfos that I really understood what that means. We are a pro-profit company, but, basically we use all our technology and capacity to help our customers solve their problems. That is our raison d’être and that is how we grow and sustain the business, Thang Nguyen Xuan says.

He believes that Grundfos’ sustainability policies are deeply rooted in the company’s business strategy and that they have a tremendous impact on the employees’ job satisfaction. In a country like Vietnam, where everyone is well aware that clean water is a scare resource, the employees are very proud of being part of a business that makes a deliberate effort to save energy, pump water more efficiently and protect the environment.

Working for Grundfos is not only about doing a job and about making a living, it is also about making positive change for our community and country, he says.

Expanding in Vietnam
While Grundfos has been providing Vietnam with water pump solutions for decades, it was not until 2009 that Grundfos Vietnam was set up as a subsidiary company. Its headquarters are in Ho Chi Minh City.

Nine years later, Grundfos Vietnam is still building and expanding its presence in Vietnam. So far, recruitment has been mostly at entry level in sales and logistics, but Mr Thang indicates that the time is soon ripe to start expanding at the middle management level as part of a new phase of consolidation. Here the Denmark-Vietnam Alumni Network may be valuable.

I can easily envision that alumni trained at Danish institutions, some even with Danish work experience, may have an advantage if they seek employment at Grundfos Vietnam. We will be happy to meet them and explore the opportunities, says Mr Thang Nguyen Xuan.

The team spirit at Grundfos is very Danish. If you come from a very individualistic competitive working environment, as many of our new employees do, it may be difficult to adjust to Grundfos’ more team oriented approach. But, if you join with previous experience from Denmark, I think it may be an advantage, he says.

Informal meetings
The Denmark-Vietnam Alumni Network was established in 2017. So far approximately 350 alumni are following the activities and news from the network.. In December 2017, the alumni network arranged the Raising Awareness on Green City Solutions in Vietnam competition together with the Danish embassy and the Danida Alumni Network, administered by the Danida Fellowship Centre.

Mr Thang Nguyen Xuan sees the alumni networking events and activities as ideal platforms for meeting alumni informally and assessing whether there is a basis for further cooperation.

When it comes to recruitment for senior positions, I think it is helpful to see people perform in a social, public context and meet them face to face prior to the hiring process. If we are invited to alumni network meetings a couple of times a year, we will get to know each other in a natural way, says Mr Thang.

Forerunners of positive change
Besides, he thinks it is an excellent idea for the Denmark-Vietnam Alumni to brand itself as a forerunner for positive sustainable change in Vietnam.  He likes the idea so much that he has offered to mentor the winners of the competition.

I am very impressed by the proposals we have seen. I actually got goose bumps during the different organizations’ presentations because they lay out the positive, sustainable change in Vietnam that I would like to see and be part of, says Mr Thang Nguyen Xuan.

About Grundfos Group
With more than 16 million pumps produced each year and over 17,000 employees in 45 countries all over the world, the Grundfos Group is one of the world’s leading manufacturer of water pumps and pumping system.  Its mission is to develop, produce and sell high quality pumps and pumping systems across the world, with the intention of making the lives of human beings easier and more comfortable, while continuing to make an active contribution to improve the global environment. Grundfos Group was established in 1945.