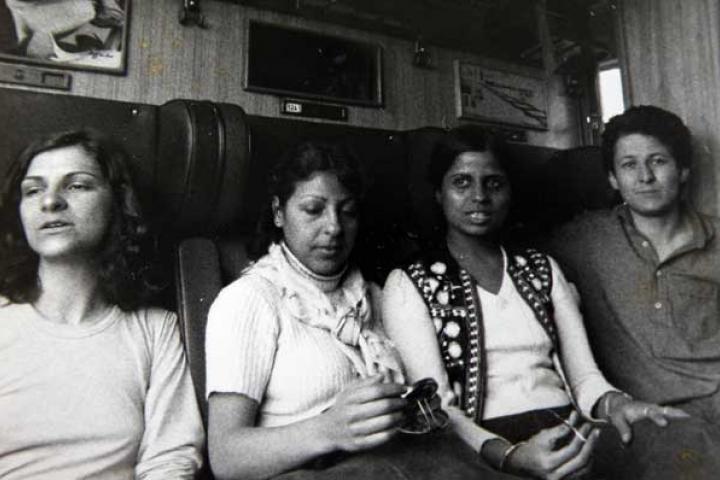 The article was first published in Danida Fellowship Newsletter, September 14, 2011

Studying in Denmark is a powerful experience! And Denmark offers a new vision to foreign students!

These are the main messages of Anuradha Desai and Somsook Boonyabancha, two vocal women reuniting in Denmark with four other students and their teacher after 30 years.

Anuradha and Somsook are sitting around a Danish design table in an apartment owned by their former teacher Jørgen Andreasen close to the waters of Oresund.

They are both holding executive positions in development organizations and their tight schedule allows just a few days in Copenhagen. But they take their time to explain why they themselves are willing to pay an overseas plane ticket to meet with their former fellow students.

Students from all over the world
Anuradha Desai is originally from India, but now living in USA. She was 27 when she arrived in Denmark in 1978 after finishing her architectural studies and working 3 years in an architect’s office. In fact she intended to go to USA for further studies, but a friend introduced her to the Danida fellowship and off she went to Copenhagen. She ended up staying 2 and ½ years studying housing in the Foreign Students Department at Kunstakademiet.

We weren´t just students from the third world. There were students from all around; Yugoslavia, India, Brazil, South Korea, Argentina, Turkey, Thailand, Greece, Spain, and Italy, she recalls.

A new vision
For Anuradha, the socio-economic aspects of housing taught in Denmark was an eye opener.

Studying housing was not just about design and construction, but also what policies mean to people and their livelihood. Who gets access to housing and how.

Among others, the foreign students created comparative analysis about politics of the different countries and how it affects housing policies.

In the architecture schools in our own countries there was almost no focus on politics of housing, Anuradha recalls.

Somsook Boonyabancha, a student from Thailand, came to Denmark in 1979 and stayed for almost a year.

She finds that Denmark offered something completely new to her:

“It gave me a deeper and broader way of looking at housing development. Not just the technical and financial aspects.”

In her country, Thailand, housing is about construction and building.

You plan to build 10.000 houses and you deliver, she says and continues: We don’t think much about community aspects. That we bring people together. That we build a system that people share. Denmark studies offered that vision.”

Crazy development
Anuradhi discovered something else during her two year stay in Denmark: Inequality in housing systems.

What makes some people get access to housing and some don´t, and what keeps them in the situation they are in? Why do we have slums in India, gecekondus in Turkey and favelas in Brazil? she asks.

For Anuradha this meant that bringing up people’s economic standards and their political power was a critical piece in the urban development work.

Somsook says that people should be at the center of development: We come from countries where city developments go crazy. Our model is to let city development go by the market. No city planning. No proper consideration of people.

This results in congested cities with skyscrapers and traffic jams.

What Denmark can offer is city development with more open spaces and more engagement of people at all levels, Somsook tells.

Don’t be humble Denmark
Denmark should not be too humble,Somsook continues.

She feels that Danida and the Danish government should play a more active role in creating intellectual learning space.

“Other people can learn from this society. What are the good things? I changed significantly. If I can change, more than 100,000 people can change, too.”

She advises Denmark to stimulate networking among present and former students. But that is not enough:

Our world is moving into crisis. We have to provide a more proactive space for learning. We need to contribute the understanding of how we manage the change in our society better. Danida should play a more active role here!

Danida should engage people to build on the experience, create powerful networks and sustain a knowledge base.

The ultimate goal is to create change and we are the agents of societal change. We need the space to come together and think again – and then bring the knowledge back to our own work. If you don´t allow the time to reflect you don´t build the creativity it needs to work so actively.

Seeing the real substance
For Somsook the choice was easy when receiving the invitation for the reunion:

Studying in Denmark was quite a powerful experience in my life. It made a significant change in my understanding and in seeing the real substance. What I have been doing with so much passion all these years has got a significant contribution from this course in Denmark. This is the reason why it is interesting to see all the friends after 30 years.

Anuradha nods and reaches out for a photo of the group travelling to Istanbul by train to study housing development in Turkey in 1979.

“We tell each other that we still look the same, but we don’t,” she laughs and gets in a nostalgic mood.

I used to bike a lot here in Denmark and it was a liberating experience. It was not just transportation getting from A to B. It was giving me physical exercise, saving energy and it was also cheap. Now I bike to work in Boston and encourage my friends to do so also.

Being here in Denmark again is to reminisce about our history, but it also shapes our future. We got the inspiration when we were here and we want to bring back some of that in the next phase of our lives.

Anuradha and Samsook leave the table and join Leda from Brazil, who is reading a magazine on the sofa. A few minutes later, Eric, a Dane working in Brazil arrives. Now only Rosaluz and Licha from Mexico and Dragana from former Yugoslavia are missing.

In the Oresund apartment past, present and future meet.

What are Anuradha and Samsook doing now?
Anuradha Desai after working for nearly 25 years with organizations like Oxfam, Save the Children and Citizenn Schools just completed her tenure as the Executive Director of a Non-Profit organization called International Center for Reconciliation (ICfC) based in Boston, Massachusetts.

In the next phase of her life, Anuradha is interested in working with women, children and education “ to let their voices be heard and their full potential materialized.”

Somsook Boonyabancha has, for more than 20 years, been the Secretary for Asian Coalition for Housing Rights, a platform of professionals, communities and regional organizations working together on people’s housing in Asia.

While working in Thailand she has had close ties with Danida and the Danish Environmental Program Danced and has also facilitated in guiding Danish crown prince Frederik, and crown princess Mary, when they were inspecting Danish aid to the rehabilitation of affected communities after the tsunami.

Fact
From late 1970’s up through the -80’s foreign students were invited by the Danish government to partake in courses in Denmark, and their stay was administered by the Ministry of Foreign Affairs in collaboration with International Student Centre (the precursor of Danida Fellowship Centre founded in 1990).

March 31, 2020
The local alumni networks in Kenya, Burkina Faso and Mexico have already held their annual general meetings for 2020. Such…

Danida Alumni Activity Grants in the time of COVID-19

March 30, 2020
The coronavirus/COVID-19 pandemic delays upcoming activities and disbursements under the latest round of Danida Alumni…

March 30, 2020
With the corona/COVID-19 pandemic impacting the extent to which we can interact with each other in ways we are accustomed to…

March 24, 2020
We have changed the procedure for nominating candidates for the annual Danida Alumni Prize. Instead of issuing an annual…